The Twilight Fanon Wiki
Register
Don't have an account?
Sign In
Advertisement
in: Articles by MrsLunchBox, Females, Half-Vegetarians,
and 4 more

Eve is a young hybrid bbnwho has to live in Italy as a member of Mariam's coven. Following the coven's dissolution, Eve remained separate from her former coven mates.

Eve was born in the 1500's century in Naples and was raised to a strict Italian Christian. Her mother had died a few months after her birth sometime time in the 1490s in Naples, Italy. Her father blamed her many times for her mother's death when the birth of her older brother was the real reason she had taken ill. He was continually abused by her brother during his childhood, her father didn't mind as he called it justice for what she had supposedly done to her mother.

When she was 15 years of age, she began receiving short visions about her brother and father, ways they would die and stopped them, for which they accused her of learning supernatural powers. These incidents continued until she was 20. Her brother tried to kill her, but she killed her brother instead by snapping her neck. As trauma physicians weren't common in the part of Naples she lived in, residents and her father believed she killed her brother with dark magic, and had her locked up. Ready to be executed soon later, she encountered Mariam who had heard of her skills and offered her a choice, live or die. Eve knew who she was and what her intentions were, and she excepted her offer. After her long and excruciating transformation, she woke up and killed all the guards, and her father. She left with Mariam along with the rest of her coven and became a half-vegetarian, drinking mostly animal blood and human blood from those that were sinister towards the innocent.

Following Mariam's death at the hands of the Volturi, Eve left the coven, becoming a nomad, and a half-vegetarian.

Eve is a very beautiful young woman with an oval face, light olive complexion, almond-shaped brown eyes which are sometimes mistaken as doe-eyes, and smooth, long, straight dark brown hair. Her height is about 5'5" to 5'6" and she has a slim, slightly athletic physique.

Though Eve is kind, honest, protective and loyal friend, she is surrounded by an aura of mystery and secrets. Her coven mates describes her as a psychopath and a dangerous woman. So far, this has proved untrue. Eve has a very calm demeanor, and is not easily shaken or very keen to her surroundings. She is also supportive and tries to protect the innocent.

Eve possesses the regular abilties of a vampire; enhanced speed, strength and senses. She had learned a little about combat from her time in Mariam's Coven, but wasn't interested in it further when she was forced to fight againts other vampires. 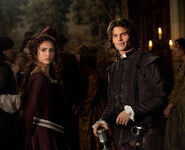