The Twilight Fanon Wiki
Register
Don't have an account?
Sign In
Advertisement
in: Wolf-Shifter, Ember Moon Pack, Beta,
and 3 more

Triggered his gene at 17

Jack (By Jacob, Bella and Alyssa)

Jackson is a member of the Guerrero Family and the Ember Moon Pack.

Jackson was born to Michael and Samantha Guerrero. Through childhood and adolescence, Jackson has always been close to Jacob, Rachel and Rebecca, and Jackson did meet Bella in childhood but they were never that close with each other. When Jackson was 7 years, his family was targeted by vampires that knew of the Guerrero Family secret and Jackson's twin brother and his mother was both killed during the hunt. Jackson and his father was the only survivors of the Guerrero Family and Michael is always there for Jackson, they are very overprotective of each other, since they only have each other. When Jackson was 18 years old, his wolf gene was triggered in January 2006 and his father helped him with his wolf powers. Jackson has been hunting vampires with father since he triggered his wolf gene, Jackson and Michael made a truce with the Olympic Coven and the Shape-shifters packs. During childhood, Jackson was the best friend of Jacob Black and Alyssa Marshall, a casual friend of Bella Swan and the sworn brother of Cole Hunter.

Jackson is extremely attractive with his russet skin, dark black hair and dark brown eyes. Jack has an extremly strong built and is 6'0.

As a wolf, his fur is dark grey, and he has the typical glowing yellow eyes that comes with being a wolf-shifter.

Jackson often wears a green and black leather jacket, and he has long black pants and a pair of dark black shoes.

When Jackson was very young, he was a very nice kid that would always help his parents around the house and Jackson is very energetic as a little kid and he would always play with his twin brother a lot. Jackson likes to jog with his father and they both enjoyed training with each other a lot. Jackson is shown to dislike anyone that is a vampire besides Bella and the rest the Cullen Family.

Super Strength - Jackson is a wolf-shifter, which makes physically stronger than humans, supernatural hunters, shape-shifters and other wolf-shifters. He can match a vampire in his wolf form and he has killed and defeated a bunch of vampires. Jackson was able to snap vampires necks with ease, Jackson is also able to toss humans and hunters easily. Jackson is the strongest member of the Ember Moon pack.

Super Agility - Jackson can jump, climb and move without being tired. Jackson is able jump and climb trees with ease, and Jackson doesn't get tired at all that much. Jackson can jump high than a lot humans in his school.

Accelerated Healing: Jackson is able to snap all his bones back into place after being broken and have been seen to be unphased by injuries from gunshots, stab wounds, and torso impalement. This makes him very hard to kill. Jackson can recover from nearly any wound besides that caused from silver, which effects Jackson the same as conventional weaponry effects humans. If Jackson lose a limb, he can stitch it back on and it will heal back to the body, but the limb will be weak for a couple days.

Super Senses - Jackson has extremely acute senses, even in human form. Jackson can also smell things such as fear. He can hear people's heart beats, and he can sense werewolves, vampires, supernatural hunters and shape-shifters.

Longevity - After Jackson triggered his wolf gene, he started to age slower than a average human, and Jackson is immune to sickness, viruses and other things that can kill a human. Jackson can only be killed by getting his heart ripped out, fire and getting his head cut off. Jackson doesn't age anymore compare to humans, who age.

Shifting - Wolf-Shifters turn into enhanced wolves at will increasing their powers to they're peak, and making them extremly dangerous to vampires. They can partially shift well in human form, eye colour changing and growing fangs and claws, and this increases their abilities to that well they're in their wolf form.

Alyssa Marshall's is Jackson childhood friend and his girlfriend. Alyssa is a witch of the Marshall Family, and they shared a very close bond as well. Alyssa and Jackson has known each other since childhood, and they always had a crush on each other. Alyssa and Jackson started dating in high school, and they shared a close bond and they will always protect each other from any danger. During childhood, they were best friends and Alyssa had a crush on Jackson since they were little.

Jackson is a member of the Ember Moon pack, and Jackson is very close with his fellow wolf-shifters. Jackson is the second-in-command of the pack and the pack respect him very much. Jackson share a very close relationship with his pack members. It's currently unknown how long Jackson been in the pack.

Cole Hunter is Jackson's childhood best friend, sworn brother and closest ally. Cole is a supernatural hunter that hunts vampires and other supernatural creatures and they has known each other since childhood. Cole and Jackson has always been very close to each other, and they are sworn brothers as well. Cole supports Jackson relationship with Alyssa Marshall. Jackson, Cole and Jacob gets along pretty well and they will always defend each other from any threat. Cole is Jackson's oldest friend and they have known each other since they were 3 years old. Cole and Jackson met Alyssa, Jacob, Bella, Rebecca and Rachel at the age of 6. Jackson and Cole always have a good relationship, and they always protect each other. 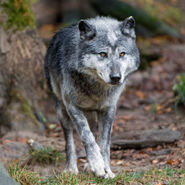