The Twilight Fanon Wiki
Register
Don't have an account?
Sign In
Advertisement
in: Vampires, Hilda's coven, Non Vegetarians,
and 5 more

View source
watch 01:36
We're Getting Mutants in the MCU - The Loop
Do you like this video?
Play Sound
Gallery search

Victoria was a Vampire member of James' Coven, Valdia's Coven, the leader of the Seattle Newborn Army, and Hilda's Coven. But she was killed on June 15,2006 by Edward Cullen.

"Victoria had always seemed like a force of nature to me—like a hurricane moving toward the coast in a straight line-unavoidable, implacable, but predictable. Maybe it was wrong to limit her that way. She had to be capable of adaptation."
—Bella on Victoria[src]

Victoria was born in London, England in the 1550s. Her mother was a scullery maid and her father was the master of the house. She was the second illegitimate child, after her sister, Anne. Victoria and Anne worked hard as servants from early childhood. Anne was quite pretty, with mahogany hair and a cream and rose complexion, and though the green-eyed, bright red-haired, and freckled Victoria had nice features as well, she was considered "witchy." The sisters eventually got jobs together, Anne as a lady's maid, and Victoria as a kitchen drudge. The master of the house mistreated them; he was not a kind man, quick to beat a servant for any perceived fault - and lecherous as well. Both sisters grew adept at disappearing whenever possible. With her shockingly bright hair, it was more difficult for Victoria to avoid notice than most, and she received extra beatings simply for being visible.

Though their jobs kept them fed, the two sisters fled the house when Victoria was twelve years old. To avoid living in the streets during winter season, they started working for a local pimp, on the condition that they would receive free lodging with the other working girls. The situation was worse for Anne and nearly as bad for Victoria as the house they'd run from, but it was better than the streets. Victoria perfected her ability to evade during her time here. One night, Anne went out to find a client—but she never returned. The pimp kept her locked up, but she managed to escape shortly. She spent 2 years in the streets and survived on her own, sleeping in small, hidden places and stealing as little food as possible to keep her theft from being noticed and moved from house to house, leaving no trace behind. Her evasion had been perfected to the point that even dogs could not react to her presence. At age 15, a scullery maid was fired and she took the opportunity to get the job. Though the job was hard, it was at least stable. She wasn't hit as often, and was content for most of the part.

Three years later, the pimp spotted her buying groceries in the streets and tried to follow her home, but she managed to escape. She realized it would only be a matter of time before he found her, but she wasn't sure if she could make a living in the country if she left her job. It was at this time that Anne found her. Victoria woke in the night to see Anne in her attic room, standing over her. Anne was more beautiful than ever, though she'd lost all the pink in her cheeks. Victoria was ecstatic and wanted to embrace her sister, but Anne kept her distance, moving at a speed that shocked and silenced Victoria. Anne wanted to know if Victoria was happy and safe. Anne was not satisfied by Victoria's predicament. She pondered aloud killing the pimp, but decided that he was only a small part of the problem. Victoria would never be safe until she was stronger than those who would hurt or control her. Anne asked Victoria if she trusted Anne's judgement. Victoria agreed and Anne picked her up as if she were a doll, carried her out the window, and bit her. After her transformation, she was introduced to her sister's creator, Hilda, and two other vampires, Mary and Heidi. Victoria led a perfectly happy life with her coven for 2 years, and then they were joined by Noela. Shortly after that, the Volturi came to her coven and claimed that they had drawn too much attention from society and executed Hilda for the crime. Heidi was immediately taken in by the Volturi, under the influence of Chelsea's power. Victoria sensed that the rest of them will be slaughtered whether they surrendered or not and screamed for them to run. They all ran in different directions, but only Victoria managed to escape their slaughter. She lost her only sister that day. Since then, she had avoided all vampires.

While in London, she became the target of the tracker James, and she tried to avoid him for years. Eventually, he felt intrigued by her evasive skills and no longer wished to harm her. His change of decision allowed Victoria to lower her guard and let him catch up to her. In James, she found someone who was honest in his intentions and confident in his abilities. She was also attracted to his tracking skills, which was like a mirror of her own. Eventually, she fell in love with his self-assurance. It felt safe to her, stable in an odd way. While she was happier with James, her life was neither peaceful or easy. The way he liked to live constantly put her into situations that, on her own, she would have avoided. While chasing Mary Alice Brandon's scent to an asylum, Victoria made James hesitate for a short second when they crossed another vampire's scent.

As James grew more ambitious in his games, she became more cautious. She suggested teaming up with other useful vampires for the sake of numbers. Laurent joined their coven during one of these experiments, who was also attracted to James's power.

"I'm the one with the wicked curve ball."
—Victoria.[src]

The coven heard rumors about large vampire groups claiming areas in the Pacific Northwest, and James was so intrigued that he decided to check them out. Victoria wanted to find more backup, but James did not want to waste time.

After coming across the Cullen family in Twilight, Victoria assisted James in finding information about Bella. His failed attempt to kill Bella cost him his life. Victoria, however, managed to escape to Seattle.

By losing her mate, she felt vulnerable and paranoid, and created a companion for her own safety, choosing a young human man, Riley Biers. She made sure that he was totally loyal to her, and was surprised at how readily he believed she had changed him out of love. Then she made more vampires, feeling that if she could surround herself with allies, she would be safe. At the same time, she hid herself from these new allies, aside from Riley. She was extremely paranoid for a time, setting up layers of protection for herself. She was loosely copying what she'd seen with the Volturi guard, but waiting for her newborns to be old enough to train. In the meantime, she had Riley control them with carefully constructed lies—most notably, the myth that vampires were destroyed by the sun.

In the Twilight movie, she, James and Laurent feast on the people in Washington State, including one of Charlie Swan's close friends, Waylon Forge. She is also seen dressed in a prom dress with make-up on, maliciously spying on Bella and Edward as they dance at prom at the end of the movie.

In the first 6 months after James's death, Victoria created 15 newborns—and killed roughly 4 humans to every one that survived as a vampire. One of the first was Diego; one of the last—of this period—was Raoul. Fred was also created during this period. About half of this first wave did not survive during Victoria's absence.

Her gift forewarned her when Edward was hunting her, just as it had with James. She left Riley behind to mind the other newborns she'd created. Passing through Texas, she ran up against a territorial coven with a small force of newborns. The encounter inspired her to use her newborns as an army to exact revenge on Edward by killing Bella: a way to make him feel the same pain that she'd felt when James died. When she was sure she'd thrown Edward off her trail, she headed back to Seattle.

She tracked Laurent down in Alaska and, feigning friendship, she gleaned all information he'd learned about the Cullens from the Denalis. She asked him to do her a favor: visit the Cullens and see if they were all still with Bella. It was a win-win for Victoria; if Edward was back in Forks, she assumed he would kill Laurent when he saw the connection to Victoria in his head. If not, Laurent would bring back news of the girl's location and how many protected her.

Meanwhile, she created more newborns, leaving them under Riley's care, in case she ended up having to go through the full coven to get to Bella. After thinking carefully about Alice and her gift, Victoria put Riley in charge of making all the decisions about the newborns' movements. She made no plans to use them for anything concrete and thought about them as little as possible.

Laurent called Victoria once to report that the Cullen house was empty and he would look around to see if Bella had gone with them. She heard nothing more from Laurent and went to investigate, and discovered the werewolves. This was an unforeseen problem. James had tracked a werewolf once, for the challenge of it. He'd been successful, as usual. But the wolves were supposed to be nearly extinct, not traveling in large packs. Nor should they be able to maintain their wolf forms in the daylight. This was worrying, but secondary to the fact that Victoria had crossed a fresh trail left by Bella. The Cullens were gone, and all she had to do was get past the wolves to kill her.

No matter how hard she tried, the werewolves always found her and her survival instincts got the better of herself. However, with the Cullens absent, she was patient. Then one night, she caught Alice's scent and knew her hopes for an easy kill were over. It did not take long before all the Cullens returned.

In the movie, Victoria finds Bella in the water and attempts to make a move on her, but Jacob drags Bella out before she could try.

"Her orange hair was brighter than I'd remembered, more like a flame. There was no wind here, but the fire around her face seemed to shimmer slightly, as if it were alive."
—Bella on Victoria's hair[src]

Victoria was described as being 5'6" tall, with long, curly, brilliant orange hair that was usually described as looking like fire with the usual blood red eyes of a vampire. She had green eyes as a human. She possessed a seductive, feline beauty and had a soft, high soprano of a voice that contrasted with her fierce looks. She moved at a feline pace with perfect, lethal steps, as of her agility.

When Bella heard Victoria speak for the first time in Eclipse, she described her voice as 'belonging to blond curls and pink bubblegum', and can pass for a helpless girl to lure in a bait. 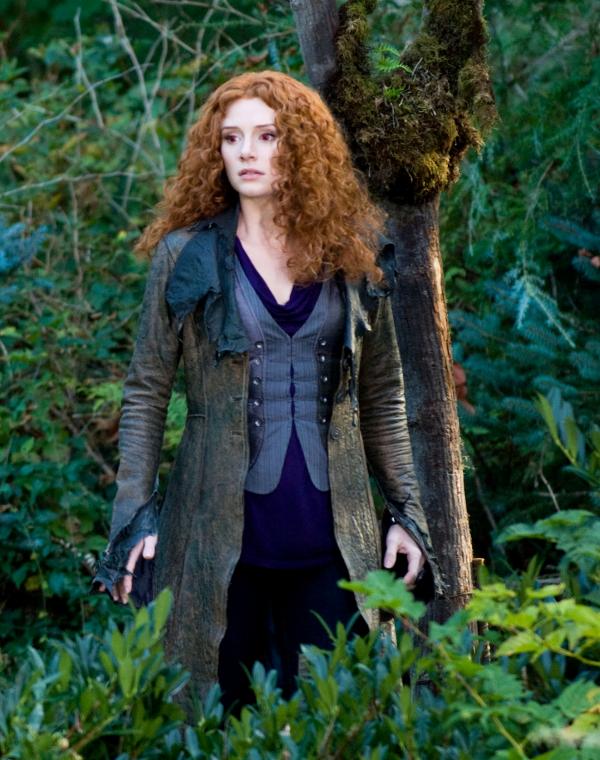