The Twilight Fanon Wiki
Register
Don't have an account?
Sign In
Advertisement
in: Males, Children of the Moon

William Vanir is the oldest and most powerful werewolf in existence along with his brothers Alexander, Patrick, and Joseph. He is the husband of Alaina and the current alpha of the Vanir Pack.

William is shown to be charismatic and noble, with good leadership skills, having of been able to lead his pack for centuries with few betrayals, and is able to inspire loyalty from his fellow werewolves. William is also a cold person, having of lost two of his beloved brothers, Alexander and Patrick, and Hypatia Padakis, a human and his first mate, after she was almost killed by Cason Diablo. Hypatia's death has also caused William to try and distance himself from most people. He also has an intense hatred of vampire, but despite that, he is an ally of the Cullen Family and has helped them on more than one occasion.

As the first werewolf, William is the most powerful werewolf in existence and has greater power than most werewolves until Jacob Black and Rose Hathaway follow by Scott McCall and Aria Montgomery

His most unique ability is that he is able to transform into his full werewolf form at will and isn't restricted to the full moon, though he only does this when he absolutely has to, as the transformation process is extremely painful.

As an alpha, he has alpha's voice

Main article: Yukio
"I will never leave you, Alice, because I love you and I will not lose another mate."
—William to Alice after their first time lovemaking

"You are my daughter I would not be any more proud then I am now."
—William to his daughter about being a dad 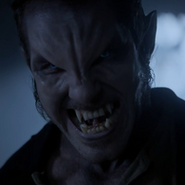